I Place the Future in the Hands of God - Abraham's Sacrifice. 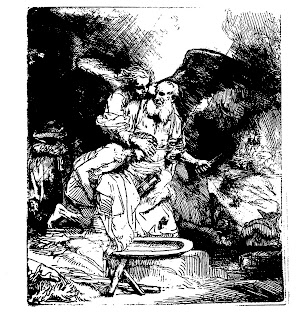 In lesson 194, the Course reminds us to place the future in God's hands, to shift our trust from the best laid plans of mice and man to the Holy Spirit, which will free us up to do our part, namely practicing forgiveness, and accepting the atonement for ourselves. Here are some passages from that lesson:

Today's idea takes another step toward quick salvation, and a giant stride it is indeed! So great the distance is that it encompasses, it sets you down just short of Heaven, with the goal in sight and obstacles behind. Your foot has reached the lawns that welcome you to Heaven's gate; the quiet place of peace, where you await with certainty the final step of God. How far are we progressing now from earth! How close are we approaching to our goal! How short the journey still to be pursued!


Accept today's idea, and you have passed all anxiety, all pits of hell, all blackness of depression, thoughts of sin, and devastation brought about by guilt. Accept today's idea, and you have released the world from all imprisonment by loosening the heavy chains that locked the door to freedom on it. You are saved, and your salvation thus becomes the gift you give the world, because you have received.


In no one instant is depression felt, or pain experienced or loss perceived. In no one instant sorrow can be set upon a throne, and worshipped faithfully. In no one instant can one even die. And so each instant given unto God in passing, with the next one given Him already, is a time of your release from sadness, pain and even death itself.


God holds your future as He holds your past and present. They are one to Him, and so they should be one to you. Yet in this world, the temporal progression still seems real. And so you are not asked to understand the lack of sequence really found in time. You are but asked to let the future go, and place it in God's Hands. And you will see by your experience that you have laid the past and present in His Hands as well, because the past will punish you no more, and future dread will now be meaningless.

Release the future. For the past is gone, and what is present, freed from its bequest of grief and misery, of pain and loss, becomes the instant in which time escapes the bondage of illusions where it runs its pitiless, inevitable course. Then is each instant which was slave to time transformed into a holy instant, when the light that was kept hidden in God's Son is freed to bless the world. Now is he free, and all his glory shines upon a world made free with him, to share his holiness. (ACIM:W-194.1-5)


The Dutch spiritual teacher Johan Willem Kaiser, some of whose work I have translated, has written in depth on the meaning of Abraham's "sacrifice," and has used the above pencil drawing from Rembrandt as an illustration. The original story is from Genesis 16:1-18. Evidently this needs to be understood on a symbolic level, and Kaiser approaches it in that vein. So what is my "son," but the self that I want to be tomorrow? The ego's ability to make life, to create offspring in the body, is THE symbol of NOT placing the future in the hands of God, but making it up for ourselves.
Conversely, the notion of preparedness to give up that self-determination, and to "Choose the second place to gain the first," (ACIM, W-328) and thus to embrace again who we are as God's Son, in total dependence of him, instead of usurping his role, and playing "father," (father Abraham), from that little willingness to give up what we wanted the future to be, and accepting God's Will instead, is met instantly with the appearance of an angel, who explains to us that we do not have to sacrifice what's near and dear to us. After all, the only thing that matters is to have the little willingness, which the Course explains as the willingness to entertain the possibility that Jesus is right and we are wrong, so it is the deferment of the ego's judgment in favor of the judgment of the Holy Spirit.

Thus in the story from Genesis, a "ram" is found entangled in the bushes, and we are told to sacrifice that instead. The Ram of course is the perfect symbol for our stubborn self-will, and the tiny, mad idea of the ego's individuality. Very symbolically also the ram is entangled in the bushes, which is a normal phenomenon that happens to us all the time if we set off on our own again, under the ego's guidance. All we're asked to do is to give up that bad habit, which is causing us so much pain. It is our mistake, and our ego's false imagining that we think this is any sacrifice at all.

Generations of readers who have taken this story literally have not known what to do with the cruelty of God, if he should ask us to sacrifice our "only" child, when instead the story reflects nothing but the gentleness of God, once we start seeing through the symbols, and hearing what it says. The symbolism is totally beautiful, and completely in line with the teachings of Jesus in A Course in Miracles, for of course these are spiritual lessons of the ages.


I gladly make the "sacrifice" of fear.


Here is the only "sacrifice" You ask of Your beloved Son; You ask him to give up all suffering, all sense of loss and sadness, all anxiety and doubt, and freely let Your Love come streaming in to his awareness, healing him of pain, and giving him Your Own eternal joy. Such is the "sacrifice" You ask of me, and one I gladly make; the only "cost" of restoration of Your memory to me, for the salvation of the world. (ACIM:W-323)


That is the only "sacrifice" that is asked of us, to let go of the fear, which is the reflection of belief in the separation, for only the separated could be fearful. By shifting our faith to the thoughtsystem of the Holy Spirit, we then enter into what the Course calls "the development of trust," trust being evidently the opposite of fear, and in fact the Holy Spirit's eraser of our ego fears.

Where am I on this path?

The section Development of Trust (ACIM:4.I.A) is extremely helpful and yet also confusing, and it is confusing mostly because we are so inclined to mis-use it by trying to determine just where we are in our process. To that question however, there is in reality only one answer:

You are at home in God, dreaming of exile but perfectly capable of awakening to reality. (ACIM:T-10.1.2:1)


As long as our minds are at all concerned about being somewhere where we think we are not, we are completely wrapped up in the illusion of time and space, and thus not dealing with reality.

It is for the same reason that the Course is so very clear that its goal is not knowledge, but rather peace. Neither is the goal of the Course enlightenment or awakening. To this point it says:


The journey to God is merely the reawakening of the knowledge of where you are always, and what you are forever. It is a journey without distance to a goal that has never changed. Truth can only be experienced. It cannot be described and it cannot be explained. I can make you aware of the conditions of truth, but the experience is of God. Together we can meet its conditions, but truth will dawn upon you of itself. (ACIM:T-8.VI.9:6-11)


In short, what we can learn is choosing peace, by learning to not choose the ego, simply because we don't want it anymore after looking at it honestly with Jesus. In the light of his truth it looses its charm, and thus we learn to un-choose it. Hence also the Course's notion of Atonement without sacrifice. Giving up nothing is not a sacrifice. And we are home because we never left.

Our job is merely to accept the atonement for ourselves, to accept that the ego did not happen, the rest will speak for itself. To put it differently our job is to get out of our own way, and to stop sabotaging ourselves. This is a critical part of the Course, since it takes away the notion of spiritual journeys, and investments of time. Only our fear is holding us back, and that we overcome gradually through the forgiveness process. But the truth is not a place you go to, you merely unlearn running away from it. For the same reason the discussion of enlightenment is also silly, since there is nobody to be enlightened in the first place, again, we merely need to give up pretending to be who we are not.

A New Exploration of the Manual for Teachers

This coming Wednesday, October 14th we will start a new cycle in my ACIM workshop at the NY theosophical society, studying the Manual for Teachers.

Starting on this one more time, brings up memories of my first experiences with the Course, and the enormous resistance against it, particularly for the tremendous sense of responsibility it seemed to saddle me with.
I actually was sitting in a workshop in Roscoe with Ken Wapnick, when it finally began to dawn on me that Jesus does mean it very literally that the only difference between him and me (the reader) is in time. That he can help us because he went ahead, but there is nothing he could do that we can't. And I surely thought that I knew better already, after all I was not a Christian, but studying Jesus in his own right as best I could all my life, etc. I thought I knew, but clearly I did not hear.

It is fundamental to the Course to understand that the only hope is to know that the only thing that can be changed is my decision to identify with the ego, and the only way it can be changed is by letting the Holy Spirit in by stopping to choose the ego, and asking for help, which must come from outside the insane ego system. And this is where the Course can help. It is crucial to know that this is the only way we can be helped, to help ourselves to quit helping ourselves and asking for help instead.

And then in turn by doing it ourselves, and practicing the Course's principles in the daily classrooms of your life, you finally realize that it is really true that the only way to teach the Course is by learning it ourselves, certainly not by teaching any classes. The practice of learning it's curriculum is the only means we have to help our brothers on the way home. And so it is not a burdensome responsibility with which it wants to saddle us, but rather it is the only way of meaningful communication, which places us back into the stream of life.